Every society has certain taboos – cultural/religious, social, and political – set apart and designated as restricted or forbidden to associate with, or even to bring in ordinary discussion. The Rohingya issue (for some strange reasons) seems to be such a taboo in Bangladesh. Both people and government here don’t want to go beyond certain limits to have a candid discussion on the crux of the Rohingya issue, which goes beyond the subject of organized persecution and killing of Rohingyas in Myanmar.

Far from being a peripheral issue for Bangladesh – or just a “refugee problem for over-populated Bangladesh” – the Rohingya issue has everything to do with Bangladesh, its identity, integrity, honor, and dignity. Both Rohingyas and Arakan are rather integral to Bangladesh, historically, culturally, and geopolitically. Now it’s time that Bangladesh asserts in unambiguous terms: “Rohingyas aren’t Bangladeshi intruders into Myanmar. They are Bengalis from Arakan, which is their ancestral home for more than a thousand years. Arakan and the Rohingyas are inseparable from Bangladesh and Bengalis, and Bangladesh just can’t be a dumping ground for persecuted and expropriated Rohingya refugees from Myanmar.” 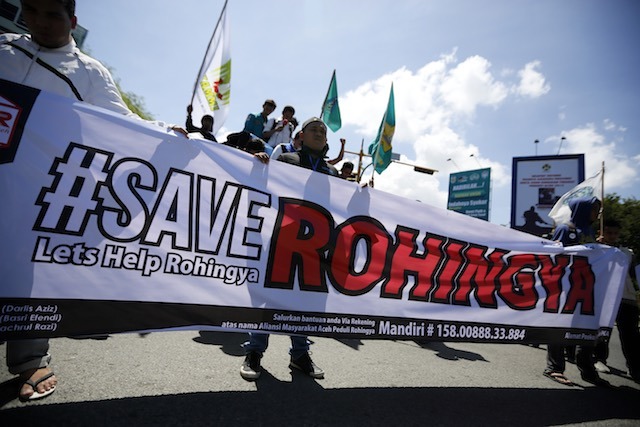 Unfortunately, what we hear from the Government, media, and a tiny minority of Bangladeshi intellectuals is all about asking (rather requesting) Myanmar to take back Rohingya refugees from Bangladesh; and to treat its Rohingya minority humanely. Some Bangladeshi Muslims and Islamic organizations occasionally protest the killing and persecution of Rohingyas in Myanmar, seemingly only because the victims are Muslims. The problem is no longer Myanmar’s internal problem, as it was never so in the past 200 years; it has everything to do with Bengalis and the state of Bangladesh! According to a CNN documentary (Jan 31, 2017), more than 92,000 Rohingyas have entered the country in the last one-year alone.

Meanwhile, the Bangladesh Government has taken two absurd decisions: firstly, it has virtually refused to grant refugee status to the Rohingyas on the flimsy ground of “over-population”; and secondly, it has proposed to “settle” Rohingya refugees at Thengar Char, a remote, marshy, and uninhabitable island, more than 37 miles from the mainland of Bangladesh, which is often submerged in water. “This is a terrible and crazy idea … it would be like sending thousands of people to exile rather than calling it relocation,” a Bangladeshi government official told CNN recently, and he didn’t want to be named because he feared reprisals.

Although Bangladesh isn’t a signatory to the UN Refugee Convention (for some strange reasons), the country has a moral obligation to accept refugees, as the country was born, as one analyst has put it, “experiencing refugeehood”. During our liberation war, around 10 million people (one out of every seven of that time population) took refuge in neighboring India. Last but not least, Bangladesh has another obligation to the Rohingya Bengalis from Arakan, which until 1784 was integral to Bengal.

A CNN documentary (Jan 31, 2016) on the plight of the Rohingya Bengalis is heart-rending and revealing. While the Rohingyas, the sons, and daughters of the soil of Arakan or the Rakhine State of Myanmar for more than one thousand years are at the receiving end of murder, rape, torture, and expropriation at the hands of Myanmar authorities and Buddhist majority, the Bangladesh authorities have remained very insensitive to these hapless refugees. They should learn as to how some Western nations, especially Germany, Sweden, and Canada, have welcomed and accommodated Muslim refugees from Syria, Iraq, Afghanistan, and elsewhere in the Muslim World.

Bangladesh should take a proactive role in addressing the Rohingya issue. It should pay heed to what the British High Commissioner to Bangladesh, Ms. Alison Blake has recently told the world about the persecution of the Rohingyas in Myanmar in the most unambiguous terms: “Hearing the description of the torture from Rohingyas who fled Rakhine state in Myanmar, it seemed that it is tantamount to genocide.” As reported in the Time magazine (March 14, 2017), Yanghee Lee, the UN Special Rapporteur on Human Rights in Myanmar believes the Myanmar authorities “may be trying to expel the Rohingya population from the country altogether.”

It’s strange but true, while the situation for the Rohingyas in Myanmar is comparable to the plight of the victims of the Syrian civil war, the people and government in Bangladesh are at most lukewarm about the ongoing genocide of Bengali Rohingyas in Myanmar. They aren’t enthusiastic about extending whole-hearted support to the Rohingya refugees, let alone finding out a permanent solution to their problem. They even avoid raising the question: Aren’t Rohingyas Bengalis, and Arakan integral to Bangladesh? The reasons aren’t far to seek. Firstly, Bangladeshis, in general, don’t know the actual history of the Rakhine State of Myanmar, and the Rohingya people, who aren’t descendants of Bangladeshi intruders into Myanmar but are indigenous to the state, also known as Arakan. Bangladeshis don’t know that Arakan is an occupied territory, and the Rohingyas are the only legitimate inhabitants of the territory.

Arakan was a Bengali-speaking Muslim kingdom up to 1784, when Buddhist Burmans annexed the kingdom to what is Myanmar today. The British occupied Myanmar or Burma in 1826 and ruled the country up to 1948. When the British left, Arakan, also called Rakhine, remained a part of Myanmar. Meanwhile, thanks to Myanmar government policy, Buddhist/Barman people had outnumbered the indigenous Bengali Rohingyas in Arakan. After 1948, Arakanese Muslims (Bengalis who speak Chittagonian dialect) tried to become independent, in vain. The rest is history.

Now, in regards to the Rohingya issue, the options for Bangladesh are very limited. It can, however, now play a different ballgame with Myanmar. As Bangladesh should pressure Myanmar to take back all the Rohingya refugees who have fled to Bangladesh in the last few years, it should also involve the UN, international human rights agencies, and China (which has considerable influence with the Myanmar authorities) to make Myanmar respect international law and human rights of people living under its suzerainty.

To conclude, Bangladesh just can’t afford to be a passive spectator of the ongoing persecution of the Rohingyas who are indigenous to Arakan, once integral to Bangladesh. Now, there are some open-ended, — and possibly embarrassing – questions in this regard. If Bangladesh should assert its claim on Arakan is altogether a different and difficult question! If there is a military solution to the problem, is indeed an embarrassing question for Bangladesh.

The writer teaches security studies at Austin Peay State University. He is the author of several books, including his latest, Global Jihad and America: The Hundred-Year War Beyond Iraq and Afghanistan (Sage, 2014). Email: tajhashmi@gmail.com

Find us on Social Networks